There are many reasons why it’s not a good idea to buy mailing lists. In fact, it’s quite clearly a bad idea. Aside from being a potential nuisance, somewhat unethical, and risking having your bulk email account shut down, there is another downside you may not even consider… 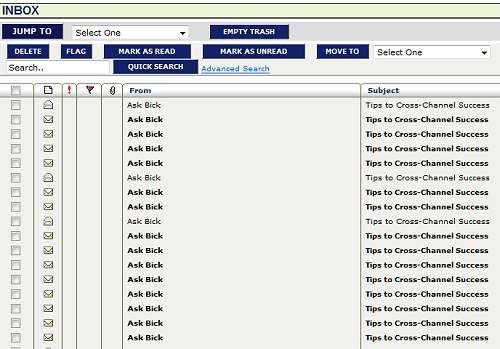 If you were to open each of these emails, you’d see that they are addressed to different names @daleyprogress.com. In fact, I apparently have 17 employees I don’t know about. None of these were actually addressed to me. So how did they all end up in my inbox? I have a catch-all set up so that if someone spells linda wrong, I’ll still get the email. If you don’t have a catch-all, you probably wouldn’t even know it was happening to you.

This has been a bother to me now for well over a year. The first time it happened, I phoned the company that sent the emails and was told they bought their list from http://www.profilecanada.com/.

I suggested they get their money back. That’s the biggest downside to buying a list: you don’t even know if the email addresses are valid. I feel sorry (sort of) for these companies that keep emailing like this because they obviously all got ripped off. But then again, maybe they got what they deserved.

Enough ranting. Here’s a little humour. That email from Ask Bick above had this footer:

I’m wondering how my 17 imaginary employees opted in!

To his credit, when I tweeted directly to @askbick about this, he responded quickly, thanked me for the feedback, and offered to unsubscribe those email addresses.